Energy for lighting, heating and cooling our buildings, manufacturing products, and powering our transportation systems comes from a variety of natural sources. The earth’s core provides geothermal energy. The gravitational pull of moon and sun create tides. The sun emits light (electromagnetic radiation), which creates wind, powers the water (hydrologic) cycle, and enables photosynthesis. Plants, algae, and cyanobacteria utilize solar energy to grow and create biomass that can be burned and used for biofuels, such as wood, biodiesel, bioethanol. Over the course of millions of years, biomass from photosynthetic organisms can create energy-rich fossil fuels through the geologic process of burial and transformation through heat and pressure.

Each of these types of energy can be defined as renewable or non-renewable. Renewable energy sources can be replenished within human lifespans. Examples include solar, wind, and biomass energy. Non-renewable energy is finite and cannot be replenished within a human timescale. Examples include nuclear energy and fossil fuels, which take millions of years to form. All energy sources have and some environmental and health cost, and the distribution of energy is not equally distributed among all nations.

Environmental and Health Challenges of Energy Use

The environmental impacts of energy use on humans and the planet can happen anywhere during the life cycle of the energy source. The impacts begin with the extraction of the resource. They continue with the processing, purification or manufacture of the source; its transportation to place of energy generation, and ends with the disposal of waste generated during use.

Extraction of fossil fuels can be used as a case study because its use has significant impacts on the environment. As we mine deeper into mountains, farther out at sea, or farther into pristine habitats, we risk damaging fragile environments, and the results of accidents or natural disasters during extraction processes can be devastating. Fossils fuels are often located far from where they are utilized so they need to be transported by pipeline, tankers, rail or trucks. These all present the potential for accidents, leakage and spills. When transported by rail or truck energy must be expended and pollutants are generated. Processing of petroleum, gas and coal generates various types of emissions and wastes, as well as utilizes water resources. Production of energy at power plants results in air, water, and, often, waste emissions. Power plants are highly regulated in the Unites States by federal and state law under the Clean Air and Clean Water Acts, while nuclear power plants are regulated by the Nuclear Regulatory Commission. Figure 1 summarizes the environmental impacts of several types of fuels, both renewable and non-renewable.

The use of fossil fuels has allowed much of the global population to reach a higher standard of living. However, this dependence on fossil fuels results in many significant impacts on society. Our modern technologies and services, such as transportation and plastics depend in many ways on fossil fuels. If supplies become limited or extremely costly, our economies are vulnerable. If countries do not have fossil fuel reserves of their own, they incur even more risk. The United States has become more and more dependent on foreign oil since 1970 when our own oil production peaked. The United States imported over half of the crude oil and refined petroleum products that we consumed during 2009. Just over half of these imports came from the Western Hemisphere (Figure 2).

The major holder of oil reserves is the Organization of Petroleum Exporting Countries, (OPEC) (Figure 3). As of January 2009, there were 12 member countries in OPEC: Algeria, Angola, Ecuador, Iran, Iraq, Kuwait, Libya, Nigeria, Qatar, Saudi Arabia, the United Arab Emirates, and Venezuela. OPEC attempts to influence the amount of oil available to the world by assigning a production quota to each member except Iraq, for which no quota is presently set. Overall compliance with these quotas is mixed since the individual countries make the actual production decisions. All of these countries have a national oil company but also allow international oil companies to operate within their borders. They can restrict the amounts of production by those oil companies. Therefore, the OPEC countries have a large influence on how much of world demand is met by OPEC and non-OPEC supply. A recent example of this is the price increases that occurred during the year 2011 after multiple popular uprisings in Arab countries, including Libya.

This pressure has lead the United States to developing policies that would reduce reliance on foreign oil such as developing additional domestic sources and obtaining it from non-Middle Eastern countries such as Canada, Mexico, Venezuela, and Nigeria. However, since fossil fuel reserves create jobs and provide dividends to investors, a lot is at stake in a nation that has oil reserves. Oil wealth may be shared with the country’s inhabitants or retained by the oil companies and dictatorships, such as in Nigeria prior to the 1990s. 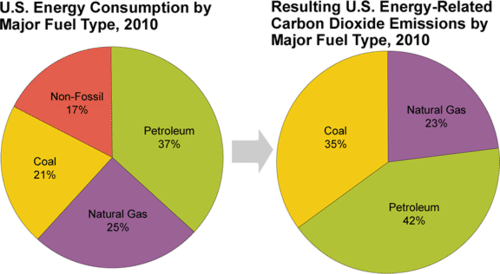 Essentials of Environmental Science by Kamala Doršner is licensed under CC BY 4.0. Modified from the original.