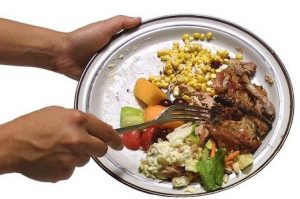 I was cleaning out my fridge the day before leaving my home for a week and saw a bag of carrots tucked into the corner of the bottom shelf. I had planned to be out of food by the time I left but through some oversight I had completely forgotten about that one bag. I tried to eat as many of the carrots as I could but one man can only do so much and I had to throw away the rest. This small action exemplified food waste, which is a large issue in the world, and the US is by no means innocent. According to the USDA in 2010, retail and consumer level food loss was 133 billion pounds of food and consumers have been shown to contribute to food loss when they buy or cook too much food and throw out extras (Buzby et al., 2014).

With food waste being such an issue and consumers taking such a large role in it, I started to wonder how much food waste a large institution like a university would produce. Luckily enough, I was a student at one of the largest universities in the Midwest, Indiana University in Bloomington, Indiana. I started to do research around the Indiana University Dining programs and halls to try and discover more about the food waste in a university the size of a small town. What I discovered, to my surprise, was that this university has taken steps to reduce food and container waste in the past couple years and is moving to become even more conscious and sustainable.

In 2016, the Restaurants at Woodland Dining Court in an Indiana University dorm resembled a food court seen at a mall. There were large number of options to choose from, including noodles, burgers, bibimbap, and many other delicacies. None of this food was served in containers or with silverware that was reusable or recyclable. Students were also throwing away large portions of food as they couldn’t finish everything they bought. It was clear that something needed to change and IU recognized that. 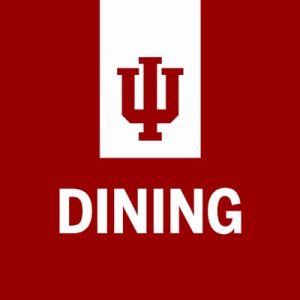 In the 3 years since 2016, IU has made many pushes to conservation and sustainability efforts. It has started a “Zero Waste” initiative in many food courts, including the Restaurants at Woodland. Containers have been changed to become compostable, and there have been efforts to sort out the waste that is still produced. Now that these changes have had some time to take effect, the question shifts from “what can IU do to be more sustainable?” to “how are these changes beneficial and what is happening to the waste from dining halls?” With the amount of food waste and non-recyclable containers in the past, the changes that IU has made should be causing reduced waste. But are these initiatives really being followed through at the lower levels and how much has reduction has there been in the waste coming from IU Dining?

The Search for Answers

My search for answers first led me to some research on why universities produce the amount of waste that they do, and some causes. In an article published by Jordan Lazell in the Journal of Consumer Behavior (2016), he noted that one of the primary reasons for food waste is that students, especially freshmen, overestimate how much they can eat and they pile too much food on those trays and end up wasting some. He also found that a main reason that students don’t recycle is that meals, especially lunch, are rushed and it sometimes takes a large amount of effort and time to locate recycling areas and properly sort through the meal and containers.

With the main cause of food waste and other waste being that too much is taken, and that students throw away food, a number of locations looked into educational campaigns and written signs to try and reduce waste. However, according to research done by Dr. Brenna Ellison, a professor of Agricultural and Consumer Economics at the University of Illinois, there was little reduction in the amount of food waste when educational efforts in the form of posters detailing food waste were implemented. There was an increase in awareness of food waste as an issue with this method, but little increase in action done about it (Velazquez, 2019). IU seems to have heeded results like these and has adopted a more proactive sustainability model.

To learn more about the model that IU is adopting as well as ask questions about the goals of the mission, I talked to Carl Ipsen, the director of the IU Food Project and a leading figure in food at IU. I first asked Ipsen about the history of the sustainability initiatives at IU and his take on them. He told me that the changes that IU is currently undertaking, such as switching to compostable utensils and containers, as well as reducing the food waste by sorting properly in certain residence halls, have been in the works for years before their implementation in the 2017-2018 school year. The initial idea for the changes to sustainability stemmed from a push to get IU to commit to the real food challenge. The real food challenge encouraged universities to increase their amount of real food (defined as food that is local, humane, created with fair wages, and environmentally sound) to 20%. At the time that the idea was pushed in 2010, IU was around 3% real food and although the university never committed to the real food challenge it has increased its amount to 8% real food which is a great start. So what else has IU done in the past couple years to become a more sustainable and conscious school?

Both dining halls took very different approaches to meeting the sustainability initiatives set at IU. Lugo told me that the Woodlands had a conveyor belt system and removed all of the trash cans in the dining court so that students could just place trays on the belt and sorters in the back room could separate trash from compostable materials and recyclables. El Bistro at Read, however, still had the trash, compost, and recycling bins in the dining hall and relied on students separating their waste into the appropriate receptacles. According to Dawson, a large number of the compost bags had to be taken to the landfill anyway because there was contamination in the bags and they could not be properly composted. Lugo cited this problem as well and the resulting ineffectiveness as the reasons the Woodlands removed all trash, compost, and recycling bins. So students are already having trouble sorting their food products and containers. To add to this issue, IU Dining has contracts with companies like Charley Biggs’ (a fried chicken restaurant with locations in some dining halls) and must use their products, which are not compostable and can easily be mistaken as such so it becomes even more difficult to recycle and compost correctly.

Both dining courts, however, do a good job at preventing food waste on the cooking side. Aside from a few instances where there has not been enough time to donate food, El Bistro at Read consistently donates unused food to Hoosier Hills food bank according to Dawson. Lugo added to that by stating that anything that can be frozen and reheated safely is stored in “The Woodlands have been able to reduce waste by ‘at least 50%'”the dining courts and used the next day to mitigate waste from the food courts. Something else that Lugo mentioned was that when a dining court has a surplus of raw ingredients, they reach out to other dining courts and pass along the ingredients so they don’t spoil and can be used in a timely manner.  Overall, Lugo stated that the Woodlands have been able to reduce waste by “at least 50%” while Dawson stated that Read still has a way to go but has still seen a sizeable decrease in waste.

Looking to the Future

While there has been progress in the dining courts, IU has big plans to overhaul the food system they use in dining courts, hopefully for the better. Currently, IU Dining has a retail model where students pay per item that they buy and a meal plan offers a discount in dining halls. The pricing of different menu items reflects the cost of the item plus other behind-the-scenes costs of cooking and infrastructure. While talking with Ipsen about the past of IU Dining I was also able to inquire about the future. When I asked about future plans, Ipsen’s eyes lit up and he started talking about his and Indiana University’s vision for the future. The plan that is currently slated to be implemented within the next 10 years is an unlimited swipe program similar to that already at other universities like the University of Michigan. The unlimited swipe model would entail students being able to swipe in one time at any dining hall and being able to go up for seconds and more until they became full. 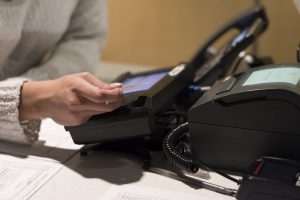 With the new model, the question of food waste arises again, however. It seems as if people have unlimited access to food there will be even more food on trays and more food thrown out because the students get full. When presented with this question, Ipsen stated that the beauty of the system was that it actually reduced food waste at the University of Michigan and other schools. The reasoning behind this counter-intuitive point is that portion sizes become smaller and students are given less food in lines since they can come back unlimited times. Students also put less on their plate as they know they can go back and get seconds if needed. A change to the unlimited swipe model would be large and take a large amount of planning so it will still be in the works for the coming years, but when implemented the plan will greatly help IU achieve its goals of sustainability and reducing waste.

What we eat and how we eat are both important. What is equally important is what happens to the leftovers and waste generated in the process. Universities around the USA have started to prioritize sustainability and “zero-waste” initiatives and Indiana University is no different. This Midwest University has a comprehensive model that was made to help students be more conscientious about the fate of their food. While every dining hall is different and has different methods to reduce waste (to varying success), there has been a culture shift at IU Dining to foster sustainability and conscientiousness. Leftover food is being saved in every dining hall from the Woodlands to El Bistro at Read. Students are having a hard time sorting their waste but education efforts and proper sourcing will lead the way to less contamination of the recycling and compost bins. The future is looking bright with the unlimited swipe initiative that is currently in the works and students and the environment will benefit from the reduced waste. When starting research for this article, I was hoping for the best, but prepared for the worst. I am happy to say that while there is still work to be done, Indiana University Dining is definitely headed in the right direction.