For this assignment, I chose to analyze a Pal Item article on the influx of gay couples into Wayne county in order to obtain a marriage license. The article talks about the large numbers of gay couples coming to Wayne County from Ohio and other surrounding states in order to obtain marriage licenses. Since the article was published in January of 2015, Ohio stilled had laws in place forbidding gay marriage, so the article talks about this as the reason why so many Ohio couples travel to Indiana to get married. The author also makes sure to mention that with future changes to the laws, these numbers and trends could change drastically.

I was extremely interested in this article because one would kind of expect people to be leaving Indiana to get married. It also caught my eye because it involves Ohio. Because I don’t live anywhere near Richmond, or have any clue about anything in Richmond, I talked to some local LGBTQ community members that I know from Oxford and Hamilton, Ohio. Talking to my friends and family about this topic helped me to look at a broader spectrum and to find a way that my life could intertwine with Richmond’s. This thought process led me to searching things about Wayne county and Ohio. Connecting this piece to my life helped me to become more interested in the project and made me feel like I actually had the right to add to the archive. Since this piece is a news article of sorts, that gives it some power. Someone thought this issue was important enough to publish it.

The article includes a lot of statistics on how many marriage licenses were issued in the given time range, how many of those were native Indiana 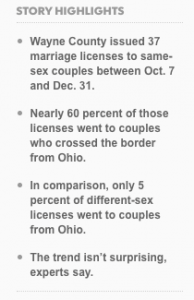 couples, and the number of couples from other states. There is an “article highlights” section off to the left of the article including the main points of the whole article. The highlights mainly consist of some overwhelming statistics, which also helps to draw a reader in because they are able to get a glimpse of the article’s legitimacy before reading the actual article. This section helps you to get the main point from the article while being able to read through it and not worry about missing something important. The article also offers up various different quotes from employees of Wayne county, and includes a picture of a wedding between two women as the cover photo. This photo also acts as a form of pathos. People see a photo and can automatically relate it to themselves or something around them. This picture helps to draw people into the article.

This article tells the story of marginalized peoples travelling to Wayne county in order to obtain their marriage license and get married. The article doesn’t really specifically mention anything other than couples that are part of the LGBTQ community. If anything, the article focuses on the term gay as an umbrella for the couples that it talks about, but it doesn’t specify further. The article is more focused on where the people come from, whether that be in Indiana, Ohio, or other neighboring states, which I think is something that is pretty rare in these kinds of article. The article doesn’t really talk about having a problem with people coming here to get their marriage license but is almost using the information as a call out to the neighboring states (Ohio) to maybe help them realize that their decisions aren’t stopping people from doing so.

This article was published in 2015, so that gives a little bit of detail as to where the country was as a whole at that point. It also includes a lot of statistics and personal statements, so it shows how people working in the system feel about the influx of people to be married. “’I’ve met some really wonderful people,’ she said. ‘I married two gentlemen who had been together for 32 years,’” said Ardene Schoeffler of the Olde North Chapel in Richmond. These personal accounts add pathos into the article, while the statistics used add in the use of logos. The main ethos comes from this being a news article, so it is automatically important enough for the public to hear about. Towards the end of the article, however, the author mentions something about the Supreme Court and how the future decisions to be made could change the patterns in Wayne County, which somewhat uses logos, but also adds some ethos in acknowledging the patterns and the possible change.

This article was just the beginning for Wayne County. As more and more legislation is passed on behalf of the LGBTQ community, the patterns here are going to change. The author also includes that “Wayne and other counties along the border might see more Ohio same-sex couples coming to Indiana to have babies — so both parents can be listed on the birth certificate,” Only five months after this article was published in January 2015, the U.S. Supreme Court legalized same-sex marriage in all 50 states. Since then, Ohioans haven’t had to travel outside of the state to obtain licenses, which would cause Indiana’s numbers to go down drastically. According to the article, 22 of 37 couples applying for marriage licenses between October 7th, 2014 and December 31st, 2014 were residents of Ohio. “In other words, 59.4 percent of the same-sex marriage licenses went to couples in which both partners reside in Ohio”. Without the majority of these couples travelling to Indiana now, Indiana’s numbers were bound to drop.